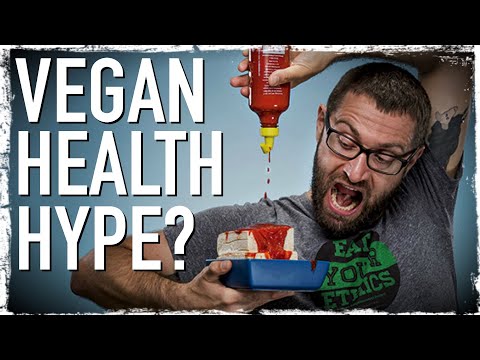 Are vegan health claims exaggerated? Can you be just as healthy eating animal products? And what’s the “best” way to eat vegan? In this video, Registered Dietitian Matt Ruscigno shares his unique approach to vegan sports nutrition

I’m the first person who will tell you that going vegan is an astronomically beneficial decision for the planet, other humans, certainly the animals, and your health…sometimes. There are so many ways to eat vegan that in reality it doesn’t always equate to glowing health. Still, vegans abound who have seen profound improvement in their health through dietary change and athletes who’ve seen significant improvement in performance and recovery. But are these success stories based in science? [tweet this] Or can we be just as healthy consuming animal products? Well my guest today has a unique take on the matter as a vegan ultra-athlete and Registered Dietitian.

Nothing gets people up in arms so much as the debate on the perfect way of eating, especially when you get into all the various factions of vegan dietary approaches.  It gets intense and health claims abound along with conflicting advice.

Well endurance ultra-athlete and Registered Dietitian Matt Ruscigno holds what is rather controversial view, at least in vegan circles, that eating vegan isn’t necessarily the only way to be healthy. If you missed my first video with Matt where he shares what he eats, be sure to check it out here.

So let’s hear from Matt about eating vegan for athletic performance, and in general, as well as the importance of not exaggerating health claims. For his full responses, be sure to watch the video, but here are a few choice nuggets:

On whether there is an “ideal” way of eating for athletic performance: [tweet this Q]

“I [recently] gave a presentation on why we shouldn’t…exaggerate health claims in vegansim, because being healthy and being vegan aren’t the same thing and the science is very complicated.  When I’m wearing my professional hat, the truth is you can eat animal products and be healthy. There are people who do it–there are people who have had great results from Paleo. [tweet this] They’ve lowered their cholesterol levels to which we vegans say “No, they’re eating all that meat their cholesterol’s going to skyrocket”. Well there’s some published research that says they’re actually lowered cholesterol levels eating Paleo, and we have to be realistic about these results and that they exist.

It’s naive to think the only way to be healthy is to be vegan. Now that said, of course, I’m an ethical vegan and my stance is that you can be just as healthy while being vegan. And we have actual research that says people who eat more plant foods live longer, they have lower rates of chronic disease, all that stuff that’s based on good, actual peer-reviewed research. And that’s great to have and I think it really gives strength to our argument but to say that you have to be vegan to be healthy I don’t think is true. And so for athletes, it’s the same sort of thing where you can perform just as well and we have the examples: we have Scott Jurek, Rich Roll, we have the whole PlantBuilt team, all those folks that are really kicking -ss while being vegan.”

His recommendations for people wanting to go vegan but overwhelmed about the various approaches and concerned about their athletic performance:

“I get a lot of clients like this that are very intelligent and they’re vegan-ish or an athlete-ish and they say ‘I read all these books what do I actually do?’ and my philosophy is you need to start where you are. You know, do you really wanna be raw and 80/10/10 or did you just read the book and you think it’s great. Is this really practical for you, do you have reasons to believe that this is better than any other way of eating? So it’s all about starting where you are. You know, can you veganize the stuff that you’re already eating and see how that feels. If you like broccoli and you’re familiar with cooking broccoli, add it to more things, eat more of it. If you want to do some meat substitutes for a little while, go right ahead. If you want to keep doing them, go right ahead. Just make sure you are indeed eating actual fruits, vegetables, whole grains, beans are very important for vegans and especially athletes, you know lots of nutrients, lots of protein, all those amino acids, it’s really an important part of a healthy vegan diet in my opinion.”

On the anti-nutrients present in beans:

“I think a lot of people are concerned about these anti-nutrients and phytates and what not…it’s true, those are present in some plant foods but really the research shows that people who eat plant foods aren’t getting nutrient deficiencies from these so-called ‘anti-nutrients.’ So on paper yes they’re there but in reality it doesn’t seem to matter for most people. When we get into like young kids or someone who needs to restrict their diet for a certain reason, sure, maybe you want to look closely at it but for most people it’s really not an issue.

We really get hung up on these very fine points and I think that that’s one, confusing and two, difficult for people who just want to eat well.  I get a lot of people who come from sort of a normal US cultural diet and they’ve never heard of any of these things and those of us who are kind of seasoned in it are like, “well you can’t eat GMO, it has to be local, it has to be organic and no you shouldn’t eat kale because it has goitrogens,” and it’s like, “what the heck are you talking about, I just want to eat more fruits and vegetables!” So you know let’s keep it simple and not get hung up on these very fine points.”

I hope you enjoyed hearing from Matt on his approach to simplifying vegan nutrition.  While I completely agree that we vegans need not and should not falsely inflate the health or any other benefits of eating vegan, the astounding devastation of eating animals makes doing so completely unnecessary. As I’ve said before in my videos, we don’t have to make things up—they’re bad enough as it is.

For me, it all boils down to the fact that whether or not we can be just as healthy consuming animal products, doing so remains profoundly devastating to the environment, diverts global food and water resources, and most importantly violently ends the lives of trillions of beings every year. And that is not up for debate.

I’m interested to hear what you think of Matt’s approach. Do you think it’s possible to eat animal products and be healthy? Do you think there is or needs to be an “ideal” way of eating vegan? Let me know in the comments!

Be sure to check out the links below to connect with Matt at his website where he offers nutrition counseling services, and at his own vegan athlete video series Strongest Hearts where he profiles incredible vegan athletes.