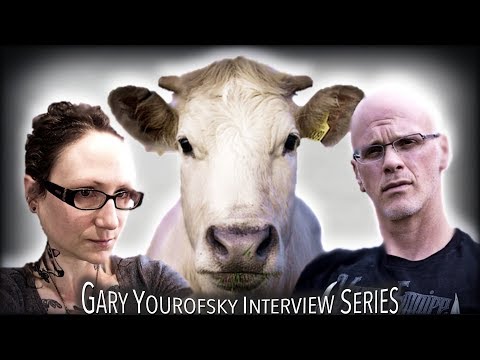 Today’s video is the final installation of my interview series with vegan activist, Gary Yourofsky.  I saved this for last because this is the message I want to leave you with at the end of this series. Gary’s words are so powerful in this video.

First off, in case you don’t know, speciesism is the concept of discriminating against other beings based on their species.  It’s primarily meant to apply to humans, and how we discriminate against other animals, as well as our tendency to put some species above others. we love dogs, but we will eat cows, etc.

Here are some select golden nuggets from my interview with Gary.  Be sure to check out the video above for his full take on speciesism:

“Human beings claim to be compassionate, claim to be know better, but then we turn around and do the same horrible things to the animals that we’ve done to each other, that logical people now condemn.  What we’ve done to Blacks, what we’ve done to woman, what we do to homosexuals.  It is time to eradicate all forms of discrimination once and for all.  From speciesism down the line.  But let me point this out too; you’re never gonna get rid of racism, sexism, heterosexism, antisemitism until you destroy discrimination at its root and that root is speciesism, It’s the first form of hatred human beings are taught.  Before any White person is ever taught to hate a Black person, if they are taught that, before any man is ever taught to hate and dominate a woman, if they are taught that, they are taught to eat the cow, eat the pig, eat the chicken, disregard this animal, love the dog, love the horse, be sad for rhino, love the elephant, but f— those fish. It’s all backwards.  If you want to get rid of all the forms of hatred—get rid of speciesism.” [tweet this]

“You teach [kids] justice, and teach them to respect the weakest, even the most insignificant of creatures—a mouse, a chicken.  Think about this: if you teach that to a child, when that child grows up and sees different sizes, shapes and colors of human beings, how do they learn to hate them?  Because that’s what it boils down to: discrimination, speciesism.  It’s all based on sizes, shapes and colors and you want to treat certain sizes, shapes and colors better than other ones?  No. You treat everyone equally. That’s all that vegans—that’s all animal rights people—want: equality.”

I hope you enjoyed hearing Gary speak about speciesism.  Be sure to watch the video for the full discussion.

Speciesism really is the original form of discrimination.  We’ve been discriminating against animals for ages, and certain individuals have been fighting against this injustice for ages as well, with the words of Pythagoras, born in 571 BC ringing prophetic.  He said,

“As long as man continues to be the ruthless destroyer of lower living beings, he will never know health or peace.  For as long as men massacre animals, they will kill each other. indeed, he who sows the seed of murder and pain cannot reap joy and love.”

We cannot learn to live in peace and love one another truly until we learn to live in peace with and love all sentient beings.  Regardless of your race, your creed, your religion, your gender, or your species, we all hurt, we all bleed, we all feel, and we all deserve respect, love, and safety.  Pain is pain, blood is blood, and suffering is suffering.

Just look into the eyes of any animal in the food industry and you will see terror, pain, and sadness.  These beings are not as distant from us as we like to think.  But our falsely-created divisions, our painfully maintained beliefs of separation, and our stubborn insistence that these creatures, these beings, these sentient, conscious lives with families and concerns their own, are nothing but things, objects, machines–placed here for our use and our needs–these culturally ingrained and socially hardwired unrealities are creating an ever-growing cognitive dissonance within our collective psyches that will eventually tear us apart.

Because at our core we know that what is on our plate, what is on our coat rack, what is in our glass, was once alive. and that life is no longer there because of us.  And that the reality of taking the life of another is too much to bear.  But that is the reality.  No matter how humane, free-range, cage-free, or local animal products are lives cut short.  And though we may not wield the blade, we are complicit. [tweet this]

I’d love to hear your thoughts on the subject of speciesism.  Let me know in the comments!  And watch the end of the video above for some comic relief after this intense topic!

Thanks so much for reading and watching this series with Gary Yourofsky.  Now go live vegan, crush speciesism, and I’ll see you soon!