Need a Halloween costume that’s quick, easy, cheap and vegan? Check out my top 11 ideas for last-minute vegan Halloween costumes that range from political statements to the simply ridiculous, all with a heaping dose of sarcastic delivery.

Are you a vegan doing the “holy Tofurky it’s almost Halloween and I don’t have a costume” scramble? [tweet this] Do you need something fast but want to make sure it’s in line with the epic vegan-ness that pervades every aspect of your life including your concepts of costumery, however last-minute they may be? Well have I got a solution for you! Well, eleven, actually.

It’s happened to all of us. You know Halloween is coming and figure you have plenty of time. Then all of a sudden it’s All Hallows’ Eve Eve and you’ve got nothin. While you need something simple and quick, you still want it to be at least halfway decent. And if it could, as a bonus, convey something about veganism, all the better! [tweet this]

Well I figured, I have two masters in art, surely I can come up with something. Prepare yourselves for the culmination of my years of higher education.

Be sure to check out the video for the costume visuals, but here are the descriptions:

Instructions: With the marker, draw moo-cow spots on the shirt. With the eyeliner pencil or similar makeup device, draw a spot or two on your face. One the paper, cardboard or poster, write a sassy message. Message suggestions include, “Go Milk Yourself,” the slightly sassier “Go Milk Your Own Mother,” the classic “Not Your Mom, Not Your Milk,” the feminist “My Body My Milk,” the a-la Chic-fil-A “Eat More Plants,” or more macabre “Eat More Humans.” You get the picture.

The next three are for famous vegan costumes.

Instructions: Wrap it around yourself.

Kick it BCE Style cause You’re Pythagoras. Not only did he advocate not eating animals all the way back in 4th century BCE, he also refused to wear wool or animal skin.

Bring it to the modern day with Concept Number Three:

Instructions: Don all of the aforementioned items and draw on a goatee-esque beard if you want the classic look. You’re health-bomb dropper Dr. Michael Greger of Nutritionfacts.org.

Now we’re moving on to some food concepts with Concept Number Five:

Instructions: Cut out three holes and put it on. You’re a raisin. Want to be fancy about it? You’re a date.

Now for a political bent, we have the next two concepts.

Supplies: White or black shirt. Sunglasses. Marker. Masking tape. Unrelenting and baffling passion to preserve the purity of mayonnaise to the point of near food eugenics.

Instructions: With marker, write “Mayo Police” on a shirt or masking tape if using a black shirt. Don sunglasses and look displeased with the world.

You’re the FDA-backed mayonnaise companies who tried to take down vegan alternative Hampton Creek for daring to make mayonnaise without eggs. Learn your backstory here.

Concept Number Eight:
Supplies: Your regular clothes. Optional are: a vegan message T-shirt and/or vegan message button and/or educational flyers about veganism. If outside of the United States, add an American flag.

You are a terrorist in accordance with the American Enterprise Terrorism Act. Learn of your crimes here.

Instructions: Rub dirt on the white T-shirt and optionally on your person. Run coconut oil or greasy substance through your hair. Apply liberally. Attach cardboard perpendicular to keyboard or your cardboard-created keyboard. Disagree with and criticize everyone you interact with but refuse to talk to them except from behind your facsimile computer hideaway.

You are an internet troll. For a slight variation, answer every question and end every argument with the word “bacon” as though you’ve produces the ultimate intellectual trump card.

For the ultimate slacker with a side of smug we have Concept Number Ten:

Instructions: When asked what you are, say “someone who gives a d—-.” For the slightly less-smug, added humor option, follow this with, “Or at least enough of a d— to wear a clever T-shirt.”

And for the grand finale, Concept Number Eleven (which I demonstrate in the video):

Instructions: Insert fake teeth. Draw whiskers on one side of your face and stay with me it’s about to get weird, a flower Twiggy style with a tear drop under it on the other, and, trust me, a mini Hitleresque stache and a unibrow. On the T-shirt, draw a little island with a palm tree and a chicken. On the back draw three slightly spaced out wavy lines.

Congratulations. You are now the embodiment of the most common arguments against veganism. Canines, lions tho, plants tho, Hitler was veg, caveman ancestor, stuck on a desert island, bacon.

I hope you enjoyed hearing my last-minute vegan Halloween costume concepts. I’d love to hear what you thought and especially if you try any of them out. What are you going to be for Halloween? Let me know in the comments! 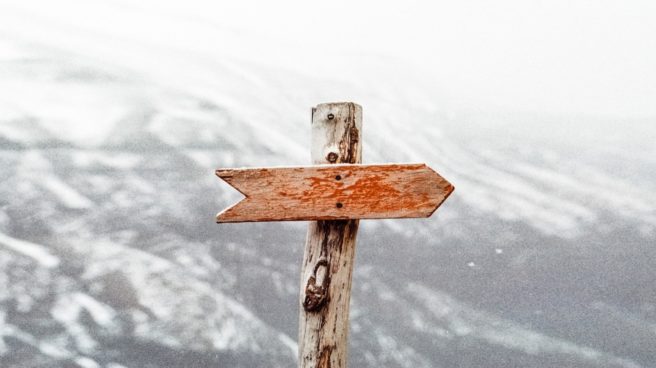 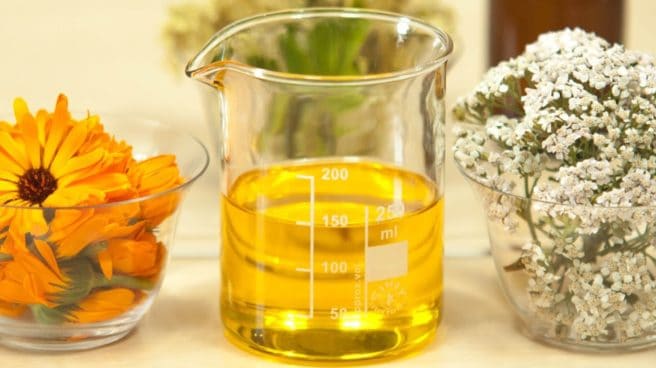 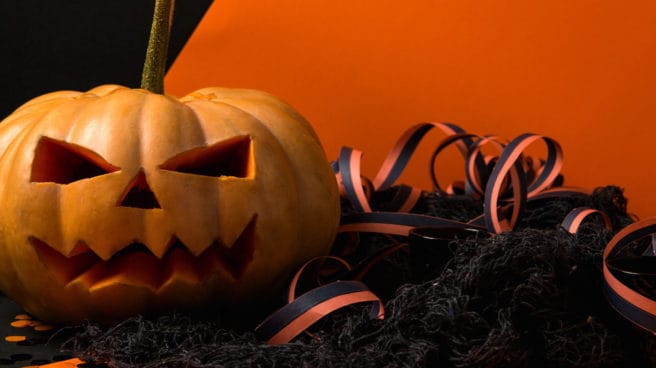 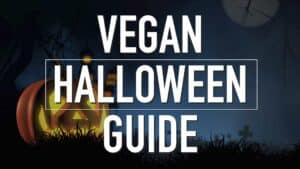 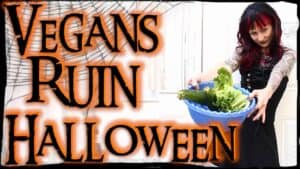 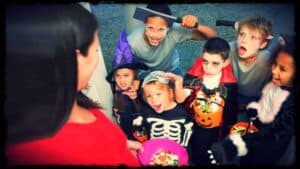 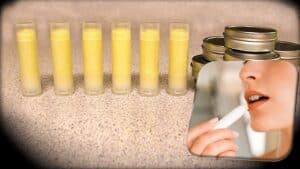