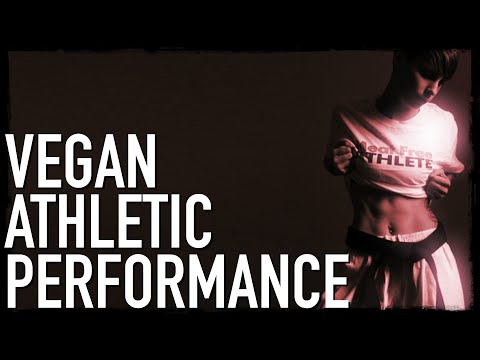 Have you ever wondered how a vegan, plant-based diet affects athletic performance? Can athletes maintain demanding training without eating animal products? Anne-Marie Campbell from Meat Free Athlete shares her experience

The stereotype of the weak pale vegan is quite tired, though strangely persists when it comes to fitness.  The idea that meat and animal byproducts are necessary for strength and performance remains prominent.  For some who may want to go vegan for the animals but are competitive athletes, the concern over being able to still perform can be a hindrance to making the switch. [tweet this]

To hear Anne-Marie’s entire answers about eating vegan for athletic performance, check out the video.  But here are some choice nuggets:

On her concerns when she became vegan:

“I don’t think I actually did have that conscious concern at first–I was so in to the whole “wow” about what was happening to the animals and I was just really concerned about not contributing to that…so I just basically veganized all the ways that I ate, and still just try to keep a healthy mindset.  But then right away, energy skyrocketed, my recovery is faster, and I’d been a competitive athlete for so many years so I thought that i was doing the right thing.  I thought I was eating right, fueling my body properly, but once I became vegan, [I have] so much more energy, I can train longer, my recovery is a lot faster.”

On her advice to other non-vegan athletes:

“Know the difference performance and dieting. … So, if you want to be an athlete, you’re going have to consume yourself with your performance.  So, I don’t restrict my calories, I don’t restrict my portions.  I’m a big believer in just listening to my body. I just give it what it wants, and I only aim for lots of colors …  because that tells me I’m getting a good variety. And then in general, if I have to label what I’m eating, it’s very high carb, low-fat, moderate to high protein.”

On why she doesn’t mind the protein question:

“I don’t mind receiving that question because I find that a lot of people that are asking me about protein are generally…they are curious.  And I don’t want to just shut them down as like, ‘oh, another person is asking me’ because then I might be turning away someone that really is open, and they can make the connection, and I could’ve just turned away a potential future vegan who is just wanting to know, right?

So honestly, I don’t mind answering that question at all.  In our society we put a high weight on protein and have this big concern over it.  It’s a little bit blown up. I don’t think we need as much protein as we’re being told we need, but nonetheless it’s a concern people have so, absolutely I don’t mind talking about it at all. So, it’s just a matter of breaking it down as well to let people know that protein isn’t just one definitive thing, right?  It’s amino acids and those amino acids are in all the things we’re eating right?  So, it’s just that nine essential amino acids that we need to get from food.  And though they’re in such a variety of food, and getting protein from a vegan diet is so easy, it is so so easy.”

On the benefits of a vegan diet:

“Just the energy level …  Just in general for training as well; I’m usually the only female in the class. there’s not too many females that are at my belt, at the school that I’m at right now, cause I’m a black belt so…usually not as many people, or people my size to train with, I’m not that big.  So, competing with bigger, stronger guys you want to have that energy to withstand, basically taking hits and keep going to continuing with the endurance thing as well. and, I would go an entire class, I would train a second class that including sparring, full training, everything and I still have energy.  And that’s incredible because before, by the end of the first training class i just be so tired, I’ll be ready to just start doing my warm down stretches, and just trying to finish the session for the day.  And then now I find myself, even after sparring I’m just like ready to, I’ll just stay and do the next class, and continue.  So, huge difference and then also the recovery.

“I never expected such an advantage because I did, like I said, I went for the animals. All of a sudden you’re just like, ‘this is incredible’.  You’re tapping into all of this energy in performance that all these years I could’ve been tapping into, but we learn when we do.” [tweet this]

I hope you enjoyed hearing from Anne-Marie.  Be sure to check out her links below.  You can’t argue with results and it’s evident that removing animal products made a profound impact on her experience as an athlete. [tweet this]

I’d love to hear from you on this.  What is your impression of veganism and athleticism.  If you’re an athlete and vegan, did you see a change in your performance with your change in diet?  If you’re a non-vegan athlete, have the stereotypical concerns stopped you from making the switch? Let me know in the comments.

And be sure to check out the video for my incredible athletic feats (and Ooby’s assistance).