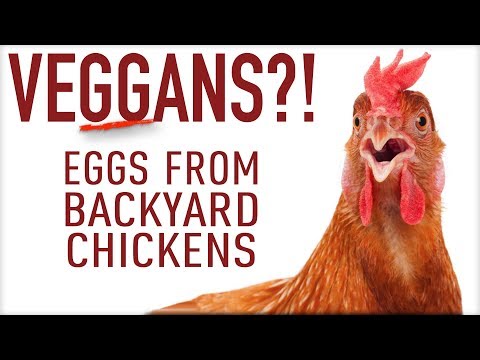 Is it okay to eat eggs from backyard or rescued chickens? If chickens are well cared for, what’s the harm in eating their eggs? A new dietary group called “Veggans” believes that eating eggs can be ethical and healthy.

A question that I get with a surprising frequency from non-vegans and vegans alike is whether it’s ethical to consume eggs from a rescued or backyard chicken. tweet this

“My friend has her own chickens and she loves them and takes really good care of them and they’re happy and healthy and they lay eggs all the time that aren’t fertilized. So wouldn’t it be okay for her to eat them?

I mean if the chicken just drops the egg and walks away? Or carries it to my friend and offers the egg to her with outstretched wing? Or leaves a little note in the ground saying ‘please take this thing that just came out of my vagina/anus and put it in your mouth?’”

Okay I may have made up those last two. But you get the idea.

There’s even a new dietary distinction called “veggan.” So, let’s finally tackle this beast: what is the ethical concern with eating eggs from rescued or backyard hens? tweet this

Note: I want to note that this video is delivered in a stylistically sarcastic tone. This may not always translate properly in the written form of the article. The often tongue-in-cheek delivery is a stylistic choice for the video.

What Is a Veggan?

Because something that comes out of the sphincter of a bird is definitely not an animal product. tweet this

Instagram is aflutter with the new hashtag and several articles have already been written on vegganism, one of which includes this gem from registered dietitian Alissa Rumsey, a spokesperson for the Academy of Nutrition and Dietetics:

“As people become more interested and aware of how food affects both their health as well as the environment, plant-based diets, including veganism, are becoming more and more popular and mainstream. Veganism may be appealing to people, but many find that it is too restrictive.”

Because once you rule out the flesh of animals’ bodies the secretions and objects that come out of their orifices, there’s just really nothing left to eat!

The Health Impact of Eggs (and Nutritional Myths)

So why do veggans feel compelled to consume the shelled menstruation of another species? Protein, of course! I mean, where else can you get it?

Food writer Vicki Anne Hadley, featured in The Daily Mail, was vegan for a whole 6 months before adding eggs back into her diet when her friend—who has her own chickens,—offered her an egg dish.

Hadley says, “I am very into fitness and have a very active lifestyle so I wanted to ensure that I would be getting enough protein in my diet.”

Never mind the fact that the USDA has deemed it illegal for the egg industry to advertise eggs as “a protein-rich food” if they’re using government money. It’s also illegal to say they “contribute nutritionally,” are “healthful” or even “contribute healthful components.” They can’t say eggs are “good for you,” “healthy” or an “important part of well-balanced, healthy diet.” Or even “safe.” Eggs were even found to have the same atherosclerotic effect as cigarettes in a 2012 study.1

However, the egg industry has been trying valiantly for decades to portray their product as healthy, rarely letting legal restrictions hold them back and, by and large, succeeding in their goal. To hear the entire sordid conspiracy behind eggs, see my video The Great Egg Conspiracy: Lies, Corruption & Kevin Bacon.

Long story short, eggs are one of the worst things you can put in your body.

The Ethics of Eggs from Backyard Chickens

However, as you may know—and as I always emphasize—veganism at its core is not about health. It can be the healthiest way to eat, but poor health doesn’t necessarily mean poor ethics. So even if eggs are horrendous for our health, what’s the ethical issue with eggs from backyard or rescued chickens?

The Reality of the Egg Industry

If you don’t already know, chickens on standard farms—and even cage-free farms—are kept indoors in cramped, filthy conditions and forced to produce an unnaturally large amount of eggs, robbing their body of essential nutrients and leading to premature death. If they don’t die from exhaustion, disease, or malnutrition, they’re sent to slaughter when their production declines—typically around 68 – 72 weeks of age, though their life expectancy is around 8 – 10 years.

The most horrifying aspect of eggs is that male layer chicks are ground up alive or suffocated by the hundreds of millions or more every year. These are brand new, fluffy baby chicks—thrown into grinders while they’re still conscious.

All of that horror aside, what about these idyllic backyard and rescues chickens, living out their lives outside in the grass, free to roam and peck as nature intended?

There are several aspects to look at here. First, where did these beloved chickens come from? Did your friend—because everyone who asks me this refers to their friend or some hypothetical situation, so I’ll follow suit—did they buy them from someone involved in the animal products industry? If so, that act in itself is supporting cruelty. But let’s say your friend rescued their chickens from a sanctuary.

It Takes Resources and Know-how to Care for Chickens

Another consideration is: does your friend really have the resources and know-how to care for chickens? Backyard chickens seem to be the new urban hipster accessory. They are to hipsters what the purse Chihuahua is to socialites.

Many people who excitedly bring home their chickens don’t realize the high cost of properly caring for them and either end up offering a sub-par or even low-quality home for their chickens, turning around and passing them off to someone else, or even letting them go as if they’ll return to the chicken wild.

Chickens (Need to) Eat Their Own Eggs

But let’s say your friend knows their chicken stuff and has the finances and land. Is it okay to take the eggs then?

What not everyone knows is that chickens will cannibalize their own eggs. This is an important practice that returns vital nutrients to their system lost with egg production. Making an egg is a serious endeavor involving an extreme loss of calcium and pressure on the hen’s body.

This is part of why hens in the egg industry die so early. In addition, taking a hens egg away sense the signal to her body to make a replacement. So the more eggs we take away the more she’ll produce, thus continually depleting her body.

If your friend’s hens don’t seem interested in eating the egg, they can always crack it a little, which usually lets the hen know it’s not going to turn in to a baby and is available for eating. This is something I did when I volunteered at SASHA Farm Animal Sanctuary. And trust me, there was nothing left.

Eggs Are Not Made for Us

But what if your friend has cracked the egg and the hens still won’t eat it. Can they then, finally, serve it up over easy, despite, of course, the health consequences? Isn’t an omelet ethical at this point?

Here’s what it comes down to: hens do not make eggs for us. They are not ours.

This insane drive to justify something—anything—that came from an animal because god forbid we not eat something that came out of someone else, is part of the addict behavior of animal product consumption.

If you think that’s extreme, take in this excerpt from an article in The Guardian quoting Isobel Davies, co-founder of Hen Nation, an “ethical egg” farm.

Davies says, “I get so many emails from vegans about our eggs. One woman said she couldn’t sleep the night before trying them because she was so excited.”

Linda Turvey, who runs the Hen Heaven sanctuary says, “I get calls from all over the country. Virtually all the eggs are going to vegans or their friends and family. I recently got a call from a new vegan who works out in the gym and wanted to order 80 eggs a week for the protein.”

She recalled one man from London who caught the train to Horsham, a bus to Henfield and then walked a mile and a half to the Sussex sanctuary just to get some eggs for his vegan daughter.

Now if that’s not addict behavior, I don’t know what is.

I hope this video was helpful. If you want to learn more about eggs, check out these posts. I’d love to hear your thoughts on the backyard chicken debate and the veggan phenomenon. Let me know in the comments!

If you liked this golden egg of a nugget, please share it around to answer this oft-asked question. To help support Bite Size Vegan’s educational efforts, please see the support page. 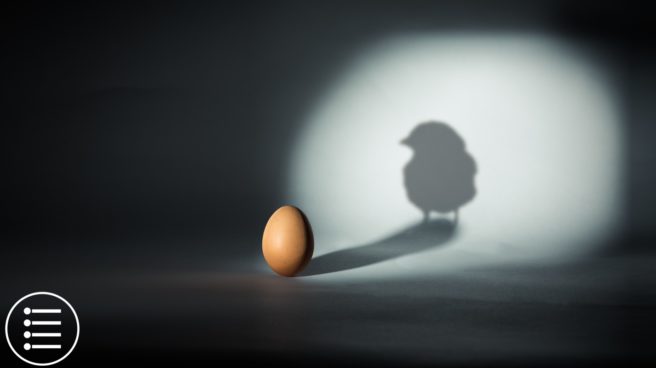 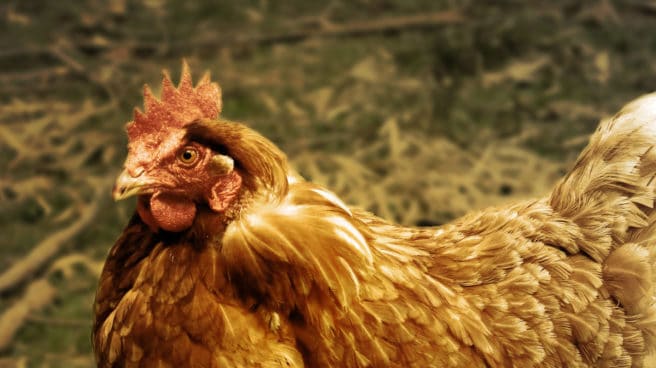 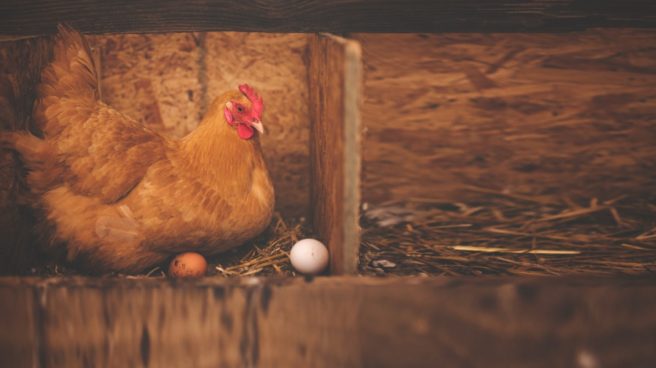