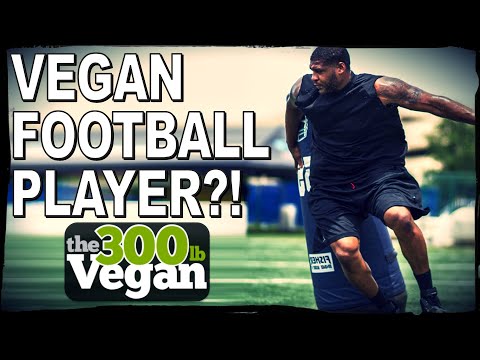 Defensive lineman David Carter was a meat-eating, milk-guzzling, BBQ-loving football player. About the furthest from vegan you could find. Then he saw a documentary and everything changed.

When defensive lineman David Carter set out to gain weight for football season, he added milkshakes and entire gallons of milk into his daily routine. And the weight came, but so did the pain, tendonitis, fatigue, and numbness. It wasn’t until he watched a documentary about the health impact of animal products that David realized he was feeding his body’s diseases. So this barbecue-loving, dairy-chugging, NFL defensive lineman did the unthinkable: he went vegan. And everything changed.

American football is seen as a “manly men’s sport.” And veganism is more or less seen as the least manly way to eat. Which is funny because artery-coating animal products end up restricting blood flow, which is pretty important for your most manly of man organs. [see the video above for a perfect illustration of this]

Having played for the Arizona Cardinals, Dallas Cowboys, Oakland Raiders, Jacksonville Jaguars, and Chicago Bears, David Carter was firmly entrenched in the football world of consuming tons of animal products to maintain his size. But it came a great cost to his health.

I’m honored to have him on the channel as part of the vegan athlete series. Without further ado, let’s hear from David himself. And be sure to stay to the end of his interview when he starts dropping some serious truth bombs.

On his approach to nutrition as a football player prior to going vegan:

“Before going vegan, I was just like everybody else and I thought that meat was the only source of protein, I had to drink as much milk as possible for stronger bones and get my protein [and] calcium. I was like that because of my family. I grew up, spent my summers on a farm, my family owned a bar-b-que restaurant, so it was definitely ingrained in me growing up that meat was the way to go, meat was the only way to get strong. As a matter of fact my mom … had a deep freezer and every year she would just fill that deep freezer up with steaks and chicken and stuff. And now that I look back at it, I’m like, damn, how many cows – I know I ate more cows than anybody else.

But anyway, that was my approach, was to drink as much milk as possible and eat as much meat as possible. I really didn’t eat a lot of vegetables. I used to tell people I was allergic to vegetables because I never liked them, it was just not me. Like, “I’m manly, I’m a big ass football player.” Like, “I’m a man, I like my food, I’m going to eat what I’m going to eat.” Most NFL players eat this way — after practice get In-N-Out burgers, like four of them, and that’s how I’m going to build myself up after practice, or get some Pappadeaux’s which is like, this fish place and they fry everything. That’s what the team provides you. There’s food like that. So, that was my outlook on nutrition, there really was none. It was just, eat whatever, and that’s how most of the NFL is.”

On his the impetus for going vegan:

“It was really after I got released from the Arizona Cardinals. My wife and I, we were just talking and she was like, “let’s watch this documentary Forks Over Knives. And at that time I got released as I was dealing with a lot of injuries that I had: tendonitis, early onset arthritis, I had nerve damage in [my] hand. I couldn’t feel three [of my]  fingers. I couldn’t grab a plate. I couldn’t do bench press because my joints were so filled with pain. I could only do a little bit of weight, 315, which is only a little bit for me. They were giving me high blood pressure medication at 25 years-old, younger than that, actually. You know, all that stuff added up and these are all old-man diseases or old-man illnesses that I was dealing with.

And I was supposed to be a physical specimen, like a top athlete, you watch Forks Over Knives, Dr. T Colin Campbell, man he really shed some light on a lot of the issues that I was dealing with. As a matter of fact, while I was watching Forks Over Knives I was drinking a milkshake. And I was drinking it and I’m like, “damn, this is leaching calcium, this is leaching calcium out of my bones. It’s making me weaker. I think I’m getting stronger, but it’s making me weaker. And I’m going to hit somebody and it’s only going to give me more likely to have a broken bone or anything like that.”

And also it causes inflammation within the body, like a constant state of inflammation, and that’s all tendonitis is and arthritis is, it’s inflammation in the joints. I’m dealing with stuff that, after watching that movie I realized was extremely preventable and reversible. And at that point I was like, “okay, I need to go vegan, like right now. It’s clear to me that I’m suffering from these illnesses and it only makes sense that the food that I’m eating every day is causing me to feel the way that I feel because there’s something in it that’s not supposed to be in there.”

On how going vegan affected his athletic performance and all of the ailments he was experiencing:

“I started going vegan February 14, and then like a month later everything just started just going away. The tendonitis was gone. It was to the point, like I said, I couldn’t bench press, I would soak in the tub, and you know, how you push yourself out of the tub to get out? I couldn’t do that. It felt like somebody was taking a bat to my elbows. And that all just really started going away. I felt more energy because the pain was going away and I was like, “let me go work out because I don’t feel like crap right now.”

So, everything just started getting better. I told you my bench press was down to 315 because of tendonitis and the joint pain, the nerve damage, I couldn’t really grip anything. My bench press shot up to 450, 460, in like a month, two months’ time because of the circulation improving in my muscles, the tendonitis going away, the arthritis going away, the nerve damage just disappearing, going away, the hurt hand is now stronger than [my other] hand. So, that’s what really happened to me and you know, after that, I was like “there’s no reason for me to go back to the SAD diet, or the meat-eating diet because – why would I just poison myself, you know?” That’s really all it was, I felt that I just cleansed myself of all that poison.”

On how the ethical side of veganism developed for him:

“So, to be honest, I didn’t start out as an ethical vegan at all. I had leather everything, leather seats in my car, all that stuff. But, what happened to me, was that once I started seeing the benefits of the vegan diet, and I was like, “I really don’t need to eat meat to gain protein” and that made me think “why the hell are we killing these animals for? We don’t need to eat them, we don’t need leather. What’s the purpose of these things?” And that’s where the ethical part came.

And I told you I have a Great Dane, that’s my furry child, that’s my son, and it’s like, if that were happening to him that would really hurt me because that’s my family. And he has a nervous system, central nervous system, he has a brain, he expresses emotion, he’s smart, he understands, he knows what’s going on, and you know, he loves just like I love. And my wife has those same feelings. If that were to happen to my wife, like you know, that would just drive me crazy, and that is what got me. And they don’t want to go through this anymore than me.

And not to mention, being a black man, seeing it’s no different than slavery. As a matter of fact, a lot of the techniques that they use in animal agriculture are from slavery, from the holocaust. So, it’s no different. Why am I going to promote that by eating meat, or buying leather, or buying soap with glycerin in it, that’s got dog fat in it, that’s where the ethical side came to me. Because, you know, it’s a fight that needs to be fought just like any other fight. People try to separate slavery and the holocaust from the animal fight, it’s the same damn thing.”

I hope you enjoyed hearing David’s conversion story. He’s had quite a journey and is now an animal activist and vegan educator, going into schools and sharing his story and the healing power of plants, as well as the ethical importance of a vegan lifestyle. You can connect with David on social media via the links below.

He’s just recently launched his brand new YouTube channel, so be sure to head over and subscribe to get him started.

Now I’d love to hear what you thought about David’s story. Are you an athlete interested in going vegan but unsure if you can sustain your strength? Did you already go vegan and has it affected your performance? Let me know in the comments.

If you enjoyed this video, give it a big thumbs up and share it around to show what’s possible on plants. If you’re new here, do hit that big red subscribe button down there for more awesome vegan content every Monday, Wednesday, and some Fridays and to not miss out the on the rest of the Vegan Athlete series. To help support Bite Size Vegan’s educational efforts, please see the support links below or click on the Nugget Army icon or the link in the sidebar. Now go live vegan, bust some myths, and I’ll see you soon.