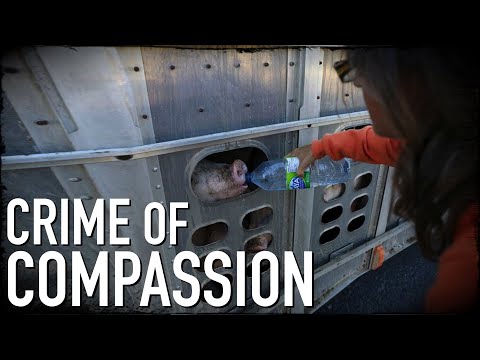 What happens when compassion is a crime? When someone carrying out a loving act is charged and taken to trial? Anita Krajnc found herself in such a position, facing 10 years in prison for giving water to the thirsty.

When you think of a crime that carries 10 years in prison, what comes to mind? Something violent, no doubt. Assault. Kidnapping. Attempted murder. What about giving water to someone who’s thirsty? What happens when compassion becomes a crime? [tweet this]

Anita Krajnc is the co-founder of Toronto Pig Save, an activist organization that bears witness to animals on their way to slaughter. I’ve personally attended one of their all day vigils and you can see my account of their incredibly important work in this video as well as my first interview with Anita on the founding of Toronto Pig Save.

Anita is now facing jail time for giving water to thirsty pigs, an act of compassion the Pig Save activists carry out at every vigil, especially those in the dead heat of Summer:

“On June 22nd, this past summer, we had our weekly vigils at Fearman’s Pork Inc. And the trucks, before they enter the slaughterhouse they stop at a set of lights, and what we do is we go up to the trucks and peer in and what we witnessed were, was a really sad and heartbreaking sight. The pigs were heavily panting, foaming at the mouth, and clearly suffering from the heat and from thirst.

And, so I said, ‘let’s give ‘em some water’ and I started giving water and then the driver jumped out of the cab and shouted, ‘Don’t give them water!'”

The full video of the incident:

“And that was the end of it. But about two months afterwards, a Toronto officer came to my home and issued me a summons charging me with criminal mischief.

I was really surprised. I [asked], ‘What does it relate to?’ And he told me the date.  And so, I showed him the video and he said, ‘You know I’m supposed to be neutral, I can’t really say anything but this is probably gonna to be in the news.'”

And it certainly was. Anita’s story has spread across the globe.  Formally charge with Criminal Mischief, defined as “interference with the use, enjoyment and operation of property,” Anita originally faced 10 years and a $5,000 fine.[tweet this] After a pre-trial court hearing on December 15th, it was reduced to 6 months and a fine. After that hearing, Anita released a statement, which she read to me when we spoke:

“I look forward to defending myself against these ridiculous charges. Compassion is not a crime. What I did was absolutely the right thing to do. Giving water to a thirsty animal is something any caring and reasonable person would do, without a moment’s notice pause. Giving water to the thirsty is a duty we all share, and is recognized universally as such in all religions and philosophies as a form of the Golden Rule.

It was obvious the pigs were suffering from heat and thirst in the transport truck headed to Fearman’s Pork Inc. slaughterhouse this summer. When I or other members of Toronto Pig Save see suffering animals at our weekly vigils, we show them compassion the best we can. We will continue to bear witness and give water to thirsty pigs.

I am grateful to the outpouring of support, love, and solidarity I’ve received over this outrageous charge and from the wise and thoughtful guidance from my counsel Gary Grill and James Silver (both vegan lawyers). On the positive side, the media attention generated has allowed for the average person to think of the equivalence of poor, suffering pigs trapped in transport trucks in the extreme heat as no different than the horror of dogs stuck in vehicles on hot days. I am charged with interfering with property – the property being the pigs. Giving water to thirsty pigs is not interfering with ‘property.’ Pigs are not property. They are individual sentient beings with feelings and they want to live and protect their wellbeing just like anybody else.”

Anita’s case has garnered worldwide attention, with an overwhelming reception on social media. and not just from vegan animal activists:

“And what was interesting is my vegan Facebook friends said that their non-vegan friends were posting petitions and videos. So it was really getting out there in a great way. It’s an issue that has reached the hearts…the conscience of all people, which is wonderful. So, it’s sort of crossed over this divide that we traditionally have between vegans and non-vegans. [tweet this]

And, you know, what I like about it is that they’re thinking about pigs — a farmed animal. They understand that if someone is thirsty, that the right thing to do is to give them water. And it’s a universal principle that’s recognized in all religions. It’s a universal principle and it’s written on our hearts and it’s written in our conscience. So it’s something that is common to all and it’s what love is. It’s just the definition of love and compassion.”

I asked Anita to comment on the concerns arguments from the other side, such as interference with the food supply. She broke down their arguments and offered compelling rebuttals, shocking revelations, and a powerful view of the ultimate outcome. (For more information on and hard proof of everything Anita mentions, please see the resources below):

“The arguments that they’re coming up with are: 1) ‘Don’t Touch My Stuff,’ the pigs being property in the eyes [of the] factory farmers; and also, 2) ‘How Do We Know What’s In the Water?’ If that’s the best they can come up with, if that’s their most compelling argument, there isn’t much there.

People give sandwiches to homeless people and you don’t assume that they’re poisoned. It’s the compassionate thing to do. We don’t want to live in a world where no one is giving water to the thirsty and food to the hungry.[tweet this]

If anyone is tampering with the food supply, it’s the factory farmers.”

2) The World Health Organization listed bacon, pork, and ham as a Group-1 carcinogen along with asbestos, diesel fuel, and tobacco.

3) The factory farmer who’s charging me, Van Boekel, actually poisoned the water with the manure and was criminally charged.  He was going to be sentenced to 30 days in jail and several hundred thousand, then he appealed.  But he did plead guilty to [violating] the Ontario Water Resources Act.

4) We’re giving water to pigs that are literally dying of heat and thirst. We have Freedom of Information reports that show “Dead on Arrivals.”

5) This issue of property is going to be one of the main outcomes. Animals are not property anymore. Public views are changing with respect to pets. Most people see them as family members. And now this case is an opening to challenge that notion for farmed animals. I mean that’s the story we’ve gotta get out there.

6) The sixth point, maybe the most beautiful point of all like, is [that] we know what’s right. Let’s listen to what’s written in our conscience and on our hearts and that is the Golden Rule. Maybe that’s the ultimate conclusion, you know, animals are not property.

That’s the biggest conclusion is that this is this is universal ethics that’s written in our hearts and our conscience, and we know what’s right. And in the end of the day, it’s gonna prevail. It prevailed for slaves, it prevailed for women, and it’s going to prevail for animals.” [tweet this]

Anita’s passion is palpable and it’s changing hearts and minds on a global scale. Activists in Argentina and Portugal demonstrated in her name outside of their Canadian embassies. The cry “Compassion is Not A Crime” has resonated worldwide.

With a Freedom of Information Act obtained “Dead Hog Loss” report showing 83 pigs dead on arrival over a 9 day period, factory farms introducing superbugs like MRSA into the food chain, the WHO finding processed meats like pig products to be carcinogenic, and the farmer accusing Anita having himself plead guilty to polluting the water supply, it’s no wonder people are waking up.

The criminalization of activism is, unfortunately, not new. In the United States the Animal Enterprise Terrorism Act allows virtually any form of animal activism to be prosecuted as an act of terrorism. For more information on this absurdity, see this video.

There are many ways you can support Anita and the Save Movement. Consider donating to Toronto Pig Save, starting your own save group, purchasing a Compassion is Not A Crime shirt, signing this petition, and sharing this video and Anita’s story everywhere you can.

It’s time for a change. It’s time to expose the real crimes and the real criminals. As Anita said, what’s right will prevail. And that’s how it ends.

Please share this video far and wide and do give it a thumbs-up if you were moved by Anita’s story.  If you’re new here, I’d love to have you as a subscriber. I put out fresh content covering all aspects of veganism every Monday, Wednesday and some Fridays. To help support Bite Size Vegan’s educational efforts, please see the support page or join us in the Nugget Army on Patreon. 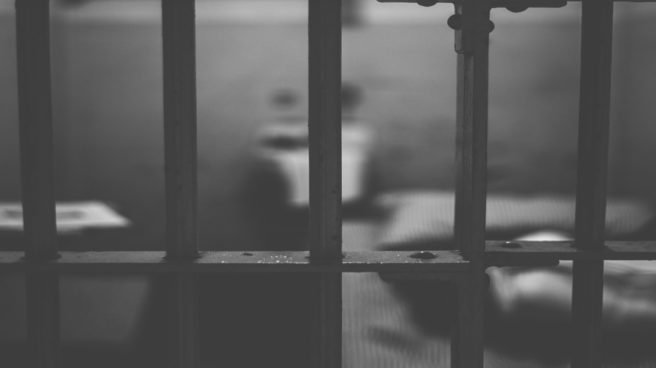 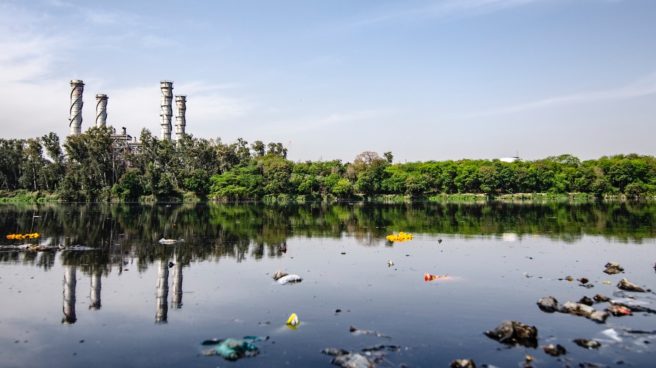